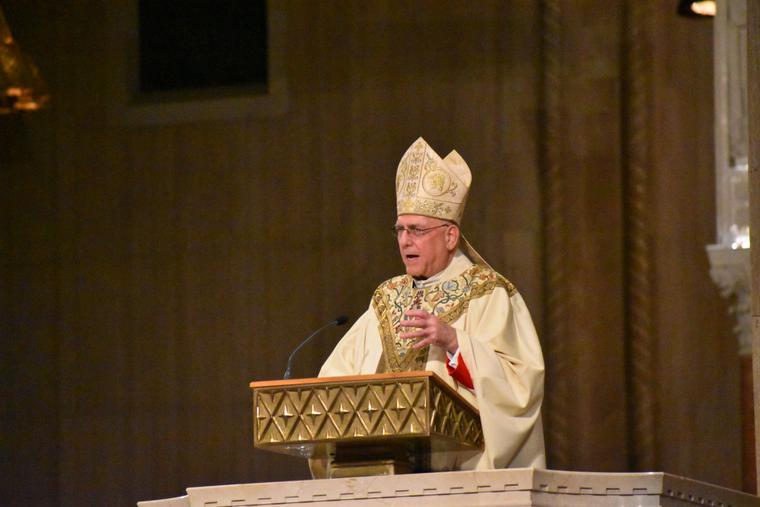 WASHINGTON — President Joe Biden’s long self-presentation as a devout Catholic contradicts his strong political stands backing abortion. For Archbishop Joseph Naumann, this means Biden needs to acknowledge this, and the bishops need to correct him.

“The president should stop defining himself as a devout Catholic, and acknowledge that his view on abortion is contrary to Catholic moral teaching. It would be a more honest approach from him to say he disagreed with his Church on this important issue and that he was acting contrary to Church teaching,” Archbishop Naumann of Kansas City, Kansas, told Catholic World Report in an interview published Feb. 13.

“When he says he is a devout Catholic, we bishops have the responsibility to correct him. Although people have given this president power and authority, he cannot define what it is to be a Catholic and what Catholic moral teaching is,” the archbishop added.

“What he is doing now is usurping the role of the bishops and confusing people. He’s declaring that he’s Catholic, and is going to force people to support abortion through their tax dollars. The bishops need to correct him, as the president is acting contrary to the Catholic faith,” he said.

Archbishop Naumann also serves as chairman of the U.S. Conference of Catholic Bishops’ Committee on Pro-Life Activities. In that role, he issued the bishops’ swift response to Biden’s Jan. 22 statement backing legal abortion on the anniversary of Roe v. Wade Supreme Court decision.

“We strongly urge the president to reject abortion and promote life-affirming aid to women and communities in need,” said the U.S. bishops’ statement.

While in the past, as a U.S. Senator from Delaware, Biden had supported some restrictions on abortion and abortion funding, Biden has since backed the repeal of the Hyde Amendment, which bars most federal funding of abortions.

At a Jan. 20 press briefing on the first day of Biden’s presidency, Owen Jensen of EWTN News asked White House Press Secretary Jen Psaki what Biden plans to do regarding the Hyde Amendment and the Mexico City Policy.

Psaki did not give any details.

“But I will just take the opportunity to remind all of you that he [Biden] is a devout Catholic and somebody who attends church regularly,” Psaki told reporters. “He started his day with attending his church this morning.”

In the early days of his presidency, Biden repealed the Mexico City Policy, which bars federal funding of foreign NGOs that promote or perform abortions as a method of family planning. With Vice President Kamala Harris, Biden has emphasized his commitment to appointing pro-abortion-rights federal judges and to codifying pro-abortion court precedents into federal law.

The issue of how Catholic clergy should respond to pro-abortion-rights politicians came up during Biden’s campaign for president. Archbishop Naumann’s Catholic World Report interview discussed the actions of Father Robert Morey, a South Carolina priest who refused to give Holy Communion to Biden at Mass in 2019 because of his abortion stance.

“I think he was acting on and following his conscience,” the archbishop said of the priest. “I believe the president has the responsibility not to present himself for Holy Communion.”

“When Catholics receive the Eucharist, they are acknowledging the Real Presence of Jesus, and also belief in the teachings of the Church,” the archbishop said. “President Biden doesn’t believe in the Church’s teachings on the Sanctity of Human Life, and he should not put the priest in the situation where he has to decide whether or not to allow him to receive the Eucharist. He should know that after 78 years as a Catholic.”

Archbishop Naumann said his “greatest concern” is the possible elimination of the Hyde Amendment.

During the 2004 U.S. election year, the U.S. bishops issued a statement, “Catholics in Political Life,” that left to individual bishops the decision to withhold Holy Communion to pro-abortion politicians.

That same year, then-Cardinal Joseph Ratzinger, prefect of the Congregation for the Doctrine of the Faith, had sent a letter to Theodore McCarrick, then-archbishop of Washington, with the expectation that it be read to fellow bishops.

The letter said that pro-abortion politicians, after first being admonished by their pastor on Church teaching and warned against presenting themselves for Communion, “are not to be admitted to Holy Communion.”

Church law’s definition of “manifest” participation in “grave sin” applies “in the case of a Catholic politician” who is “consistently campaigning and voting for permissive abortion and euthanasia laws,” said Cardinal Ratzinger, who would be elected Pope Benedict XVI at the 2005 conclave.

McCarrick read some but not all of the letter to his fellow bishops at their summer meeting, omitting key parts. He said that Cardinal Ratzinger had agreed with the bishops’ decision to leave the judgement about withholding Holy Communion up to each individual bishop. Cardinal Ratzinger’s entire letter was reported to the public afterward.

Other topics in Archbishop Naumann’s Catholic World Report interview included reflections on the March for Life, a proposed Kansas constitutional amendment to reject a state Supreme Court finding of a right to abortion, the ethical permissibility of vaccines and whether their use should be obligatory, and legislation like the proposed federal Equality Act, which could coerce religious institutions to act against their religious beliefs.