Good morning! Grace be with you today.

Those who live in Europe may want to know that I’m going to try to schedule the daily A La Carte posts for around 6 AM London time. That may let you read them a bit earlier in the day.

(Yesterday on the blog: When Jesus Brags About You)

Uprooting Evil in the Fields We Know

“We are too finite, too small to ‘fix it’ once and for all. But doing nothing is not an option. We are not without a task. We have a mission. It is not to master every incoming tide. Instead, we are to use all of the strength we have in the times we have been placed to uproot evil on our little plot of earth, in the little time we have. We cannot fix this world. Nor can we determine the weather for our children. But we can uproot evil in our day.”

The Slow Death of The Chronicles of Narnia Franchise (Video)

The Chronicles of Narnia movies were announced with great excitement and got off to a great start with The Lion, the Witch, and the Wardrobe. But then they pretty quickly fell apart. This is a pretty good little analysis of what went wrong.

“A wise pastor used to say anything good done in this world is done by tired people. Nothing worthy moves forward on momentum alone. It takes sustained effort over a long period of time.” It sure does!

AGTV exists to guard and proclaim the biblical gospel of Christ crucified, and to provide Christians and their local churches with resources to refute the errors of the “American Gospel.” At AGTV you have unlimited access to films and documentaries like American Gospel, Luther, Calvinist, Christianity Explored, and Epic. (Sponsored)

This is a very long article but a fascinating one if you give yourself the time to read it. The author writes about his own experience, and that of his father, in Soviet Russia. In particular, he tells about the necessity of doublethink. Then, as you’d expect, he relates it to our current cultural climate.

How This WWII Veteran Cheated Death 4 Times To Find Love

I thoroughly enjoyed this love story as told by CBC. “Reg Harrison slides his leather wallet out of his pocket and removes a weathered black-and-white photo of a beautiful woman. ‘I’ve been carrying that since 1946,’ said the 98-year-old. ‘Our love story? I think it was meant to be.’ But the Second World War veteran, often called Crash, wasn’t the first bomber pilot to carry the woman’s photo in his wallet, or to ask her to marry him. Harrison’s love story is one of loss and luck.”

What Do People Pick Up From Your Ministry?

Paul Levy: “For those of us who preach and teach, one of the most helpful things I have learned is that people pick up what we’re excited about. And it’s not necessarily what we think we’re preaching and teaching.”

How the Boeing 747 Changed the Way Airplanes Are Designed

I sometimes wish I had been able to fly back in that golden era of aviation. Then again, these days I sometimes find myself wishing I could fly at all!

Satan has opposed the church since the day of its founding, and he will continue to oppose her until the day of his destruction. 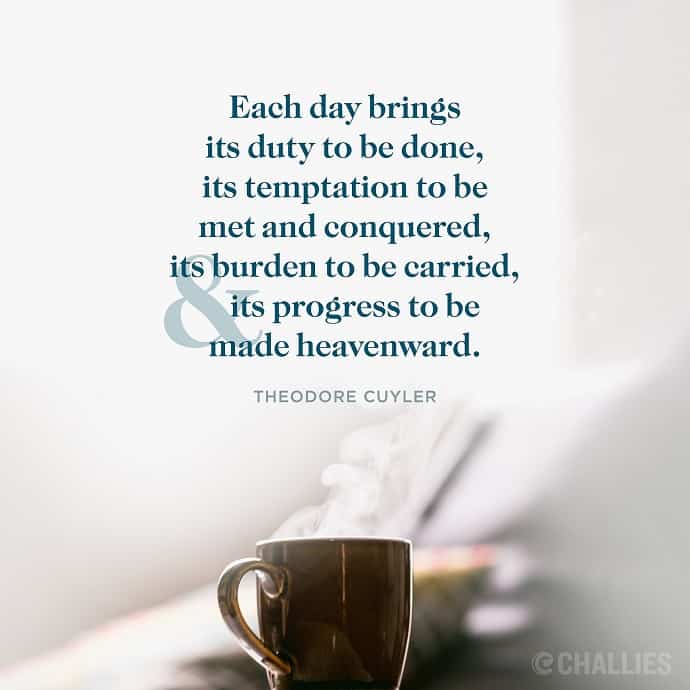 Each day brings its duty to be done, its temptation to be met and conquered, its burden to be carried, and its progress to be made heavenward. —Theodore Cuyler