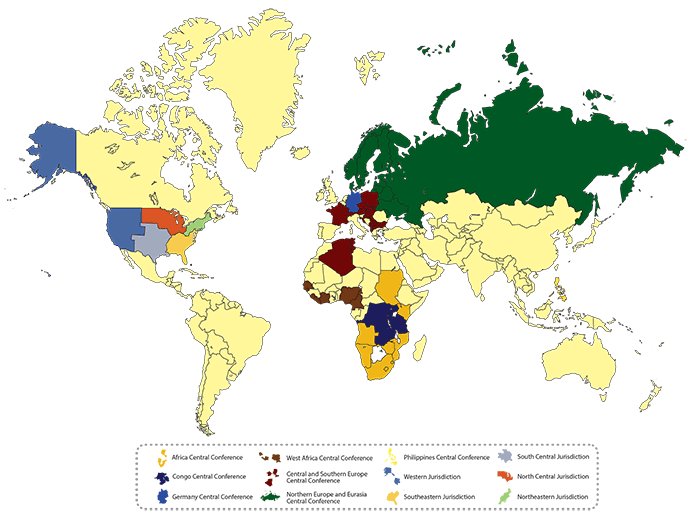 The General Conference that was scheduled to meet in May 2020 has already been delayed once and may be forced to be delayed a second time or transition to an alternative technology-mediated format. There have been a variety of challenges associated with these postponements, from the administrative to larger questions about the future of the denomination.

At this point, the denomination must find a way forward from this situation in which it finds itself. Yet it is worth point out that greater regionalization of the denomination would have prevented some problems stemming from delaying General Conference. The possibility of a church split in the United States best illustrates how regionalization could have reduced the challenges of delaying General Conference.

One of the major pieces of legislation before General Conference, whenever it next meets, is the Protocol for Reconciliation and Grace through Separation. This proposal, which is the result of mediated negotiation among mostly US United Methodist leaders from across the theological spectrum, would pave the way for the exit of Traditionalist churches with a $25 million payment to help found a new denomination. Traditionalist churches in the United States have been increasingly restive to leave the denomination in the fallout of General Conference 2019, when it became clear that Centrists and Progressives would not abide by the provisions of the Traditional Plan passed at that event.

Even amid the pandemic, Traditionalists remain focused on passing the Protocol in 2021, despite questions about whether and how General Conference will meet. They have even suggested that General Conference should convene just to take up the single issue of the Protocol. Yet the longer it is until General Conference meets, the more time there is for the negotiated consensus behind the Protocol to collapse or challenges to come from other corners, such as the African bishops.

If, however, there was a regional structure that had the ability to make some budgetary, policy, and legal decisions for the UMC in the United States, that body could potentially take up the issue of church separation in the United States. A special meeting of a US regional structure could have provided for such separation, satisfying Traditionalists’ calls for a speedy departure, even if larger questions about the global connection remained.

Of course, such a regional structure does not currently exist. But it could.

The Christmas Covenant, the first major legislative package originating in the Central Conferences, would create a system of regionalization within the UMC that would allow regional contexts, including the United States, greater flexibility in handling their own missional and administrative affairs.

It is too late for such a system of regionalization to mitigate the issues associated with delaying General Conference 2020. Passing the Christmas Covenant is not necessary to pass the Protocol, if indeed the latter does pass.

But it is not too late to implement a system of regionalization to give the church greater flexibility to adapt to the next crisis facing one of its branches. The Christmas Covenant represents one opportunity to do so.