I haven’t been able to dig up any noteworthy Kindle deals after yesterday’s huge list. I’ll keep looking…

(Yesterday on the blog: Goodnight Till Then)

Have you asked (or been asked) this question before? “It is a common objection to the existence of God: why doesn’t he make himself more obvious? And, of course, if God was inclined he could spell out ‘God exists’ using stars to make himself known if he wanted. So why doesn’t God make his existence more undeniably obvious? Here are some reasons…”

He Thinks the World is Round!

“I sat down on a split-log bench. With my impromptu geography class huddled around me, I began to show them their country, the countries next door, and all the way on the other side of the globe, the country my parents were from. Confusion followed.”

Susan Tyner: “So much has been lost in this time of COVID, and I don’t want to lose my usual Christmas, too.  This is not the December I want, and I feel like swinging this holiday season along with the rest of 2020 over my head and pitching it across the room. Mary and Joseph would understand how you and I feel.”

The Beauty and Burden of Nostalgia

“We want to feel it. A sense of home, a sense of something familiar that we can’t seem to grasp in our everyday lives. The holidays hold the promise of bygone, yesteryear, of quaint and extraordinary at the same time. And then the presents are unwrapped, the paper is strewn about the floor, the turkey is a carcass on a greasy platter by the overflowing kitchen sink, and we think, ‘Is that it?’”

Steve Lawson: “Can you imagine a Christian couple actually praying about living together before marriage? Can you fathom a young woman who professes Christ even bothering to pray about whether she should marry an unbeliever? Can you grasp a Christian businessman having to pray about whether he should tell the truth in a transaction? When the Word of God is so clear, praying to discern God’s will becomes a convenient excuse—or even a prolonged filibuster—to avoid doing what Scripture commands.”

“Jesus. The radiance of God’s glory. The exact expression of His nature. He sustains all things by His powerful word. Radiance, cloaked. Hidden. In the womb of a young woman named Mary. And there, the One who knits us together is knit together. Formed. Protected. Nourished.”

Did the Incarnation Change God? Pondering the Great Mystery of Christmas

“Much about the incarnation bewilders, but perhaps the greatest mystery relates to one word in John 1:14 — became. What does it mean that the Word became?”

Flashback: 4 Seasons When You Will Face Temptation

…temptations are not entirely unpredictable, and there are certain times in life in which they are more likely to press hard than in others. Here are 4 times or seasons in which you need to be especially vigilant against temptation. 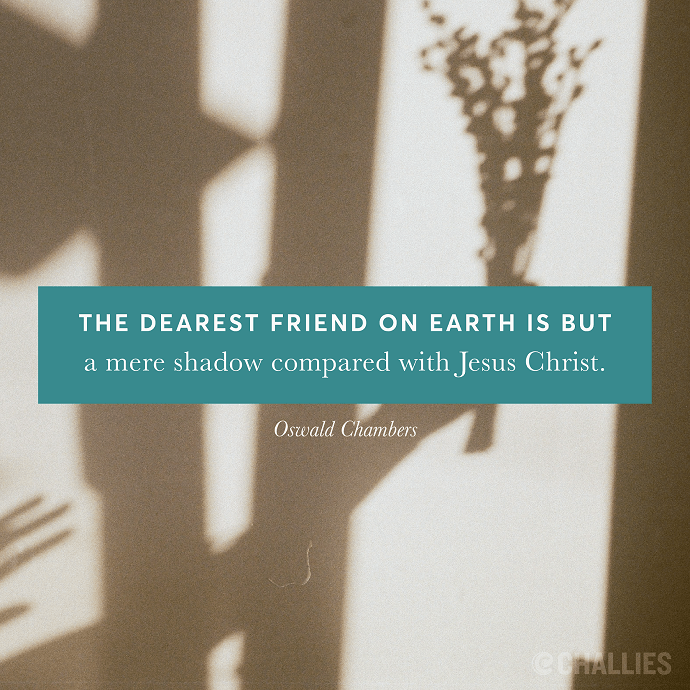 The dearest friend on earth is but a mere shadow compared with Jesus Christ.  —Oswald Chambers