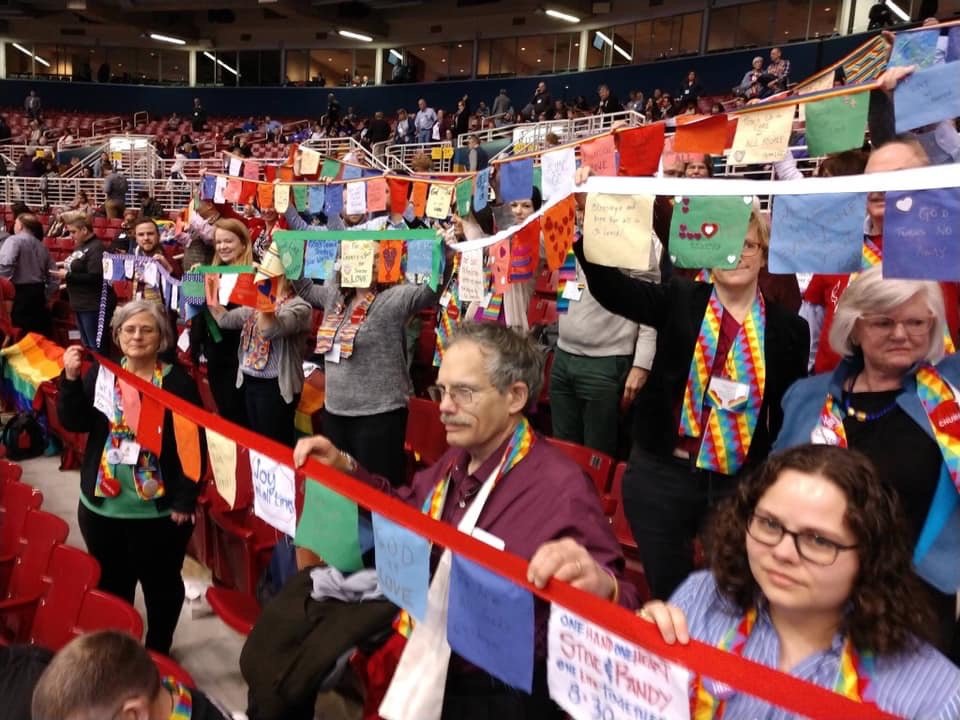 “They have treated the wound of my people carelessly, saying, ‘Peace, peace,’ when there is no peace.” – Jeremiah 6:14, NRSV

Distrust. Acrimony. Abuse. Division. This is the current state of The United Methodist Church. Yet, amid all of this, I heard my bishop “calling the church to be united in love.” Hours later, the Eastern Pennsylvania Conference voted to approve my congregation’s request for disaffiliation from the UMC. I was one of architects of our Grandview Church’s disaffiliation resolution. Nevertheless, my heart remained heavy, pondering the mirage of unity and the violence it engenders.

Church unity is an elusive goal. Christians have divided themselves throughout the entirety of our history, beginning with the Jerusalem Council in Acts 15. Paul and Barnabas ultimately could not continue to work with each other: “The disagreement became so sharp that they parted company” (Acts 15:39a).

Early ecumenical councils, such as Nicaea in 325, were significant as much for who they excluded as for the consensus they reached. Declaring the four marks of the church as “one, holy, catholic, and apostolic” in 381 did not make it so. Orthodoxy is determined by the winners, it seems. The Great Schism of 1054 saw the Western Roman Catholic Church and the Eastern Orthodox Church part company. Luther’s 95 Theses posted in 1517 precipitated the fracture of the Western church into multiple, competing, protesting sects. U. S. Methodism, it cannot be forgotten, parted ways with Anglicanism as soon as U. S. political independence was secured. Despite Jesus’s Farewell Discourse in the Gospel of John, in which he prayed “that they may be one” (17:21), his followers have not, in fact, achieved this elusive unity.

In the meantime, what violence we inflict when we insist on unity at all costs! We preach “unity, unity,” when there is no love. We call for peace without insisting on justice. We strive to maintain the structural integrity of an institution whose moral integrity has long ago deteriorated.

For example, a number of United Methodist leaders from Africa, Europe, and the Philippines issued a call for denominational unity December 18, 2019:

We are stronger together. Being in mission together as a global church celebrates our unity in diversity and positively impacts the different contexts we represent. While diversity is a challenge, we do not believe dissolution is the right way to heal the wounds that cause us pain as Christ’s Body. A truly global church committed to be in mission together embraces its differences and allows for self-determination. It is able to find common ground in affirming how we do effective ministry in places we serve. Acknowledging that our different contexts need different solutions is a better way forward and fosters mutuality. This path affirms a stronger common witness to the global community. God’s grace is present everywhere and in everyone. We are called to humbly respond to this grace in recognizing its many expressions around the world. This call we do best together. – From “A Christmas Covenant: Our Gift of Hope”

I wholeheartedly agree with much of this call, which celebrates “unity in diversity,” seeks “common ground,” affirms universal grace, and asserts contextualization and mutuality as essential to carrying out the church’s mission. This call is based on several “guiding principles and values,” the first of which is, “We are all children of God,” meaning we must “consider one another siblings of equal stature and rights.” Amen. However, to move from this first principle to the conclusion that the UMC must remain intact as an institution is a commission of violence.

The UMC, as it stands today, does not, in fact, ensure “equal stature and rights” among its members and leaders. The burden of our maintaining ecclesial unity is not equally shared. This denomination categorically discriminates against married gay and lesbian persons called to ordained ministry, despite our doctrinal standard asserting that clergy shall “marry at their own discretion” (Article of Religion XXI). This church categorically denies same-sex couples the right to marry, despite asserting in our Social Principles, “equal rights regardless of sexual orientation.” These structural injustices within the UMC cause real violence to real persons.

To insist on church unity under these conditions is analogous to insisting that an abused spouse remain in that relationship in order to “preserve the marriage.” In a situation of spousal abuse, the marriage is already broken. The marriage vows were violated at the first physical blow, the first psychological terror, the first emotional coercion. To leave an abusive relationship is to recognize the reality that unity has ceased to exist and to love oneself enough to say, “No more!” To counsel someone to remain within a situation of intimate partner violence is cruel. The loving response is, first, “do no harm,” by offering protection and, second, empower the survivor-victim to take control of their own life again, initially by removing themselves from the situation of abuse.

Friends in the UMC, this denomination is already broken; it is already wounded; members are still being abused. To the authors of “A Christmas Covenant,” I counter their assertion, “we do not believe dissolution is the right way to heal the wounds that cause us pain as Christ’s Body,” by proclaiming that neither is unity the right way to heal these wounds. I join my bishop, for whom I have great respect and appreciation, in “calling the church to be united in love.” But love without justice is not love at all.

Grandview Church recognizes the violence of this continued call for unity and is choosing to say, “No more!” Disaffiliation is no more the salve for these wounds than divorce is the answer to repairing a broken marriage. Others have made this argument before. But when “estranged beyond reconciliation,” it is, as our Social Principles declare, “a regrettable alternative in the midst of brokenness.” We cannot treat this wound carelessly, “saying, ‘Peace, peace,’ when there is no peace” (Jeremiah 6:14, NRSV). Love with justice requires treating “one another siblings of equal stature and rights” as a precondition to unity.