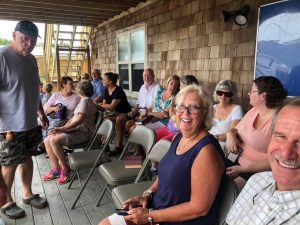 On the morning that Dorian made landfall on Cape Hatteras, Pastor Tim Fitch was at his Tri-villages home when his mother, Rev. Susie Fitch-Slater of the Ocracoke Methodist Church, initiated one of the most terrifying phone calls of his life.
“It was the kind of phone call that you never want to hear,” he says. “She told me how proud she was of me, and how much she loved me… The water had already risen more than four feet in her Ocracoke home, and at that moment, she didn’t think the flooding was going to stop.”
“I really thought that it was the last time I was going to talk to her,” he adds. “In that moment, I realized how bad it was down there.”
The Ocracoke Methodist Church was a new assignment for Tim’s mother, which she started in June of 2019. She was just starting to know her congregation when Dorian arrived on Friday, September 6, and changed everything in a matter of hours.
After that initial Friday morning phone call, Pastor Fitch waited for an excruciating 90 minutes until he received a second call from his mother, saying that she had found higher ground, and was safe.
“After that second call, my [mindset] changed, and I instantly knew that there was about to be a lot of work to do,” he says.