Ernst Lohmeyer didn’t leave behind any beloved spiritual classics. He didn’t become a global statesman for peace and reconciliation. He didn’t live long enough to fill libraries with his theological works.

Like Dietrich Bonhoeffer, Lohmeyer died a martyr. Like Martin Niemöller, he denounced the Nazis and resisted their church takeover. Like Karl Barth, he contributed seminal thinking that changed the academic landscape we know today.

But you probably don’t know Lohmeyer unless you’ve seen later scholars quote his commentary on Mark or study on the Lord’s Prayer. Unlike Bonhoeffer, he served as an officer for the German army in both World War I and II, forced even as a middle-aged man to take up arms. And it wasn’t the Nazis who killed him. It was the Soviets, who occupied the German university he led after that second terrible war concluded. They shot him on September 19, 1946, and spent nearly 50 years ensuring future generations would never remember he lived.

Enter James Edwards, the Bruner-Welch professor emeritus of theology at Whitworth University. His study of Romans and Mark brought him into contact with Lohmeyer’s nearly forgotten works. And he wondered what became of this scholar whose insistence on high Christology in the early church overturned what had been a powerful consensus. Edwards restores memory and offers closure in his new book, Between the Swastika and the Sickle: The Life, Disappearance, and Execution of Ernst Lohmeyer. 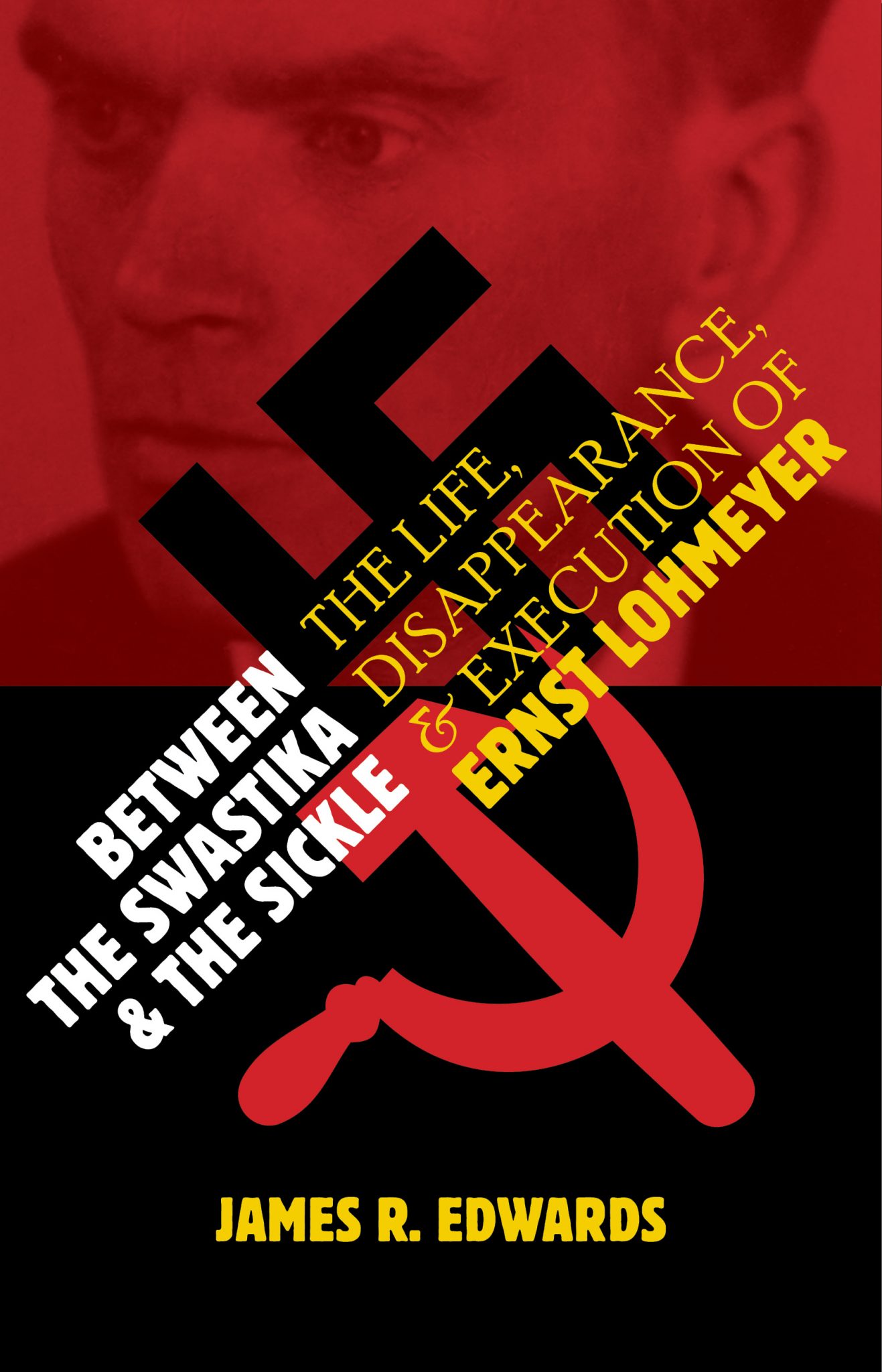 Between the Swastika and the Sickle: The Life, Disappearance, and Execution of Ernst Lohmeyer
James R. Edwards

Between the Swastika and the Sickle: The Life, Disappearance, and Execution of Ernst Lohmeyer
James R. Edwards
Eerdmans (2019). 344 pp.

On February 15, 1946, the Soviet NKVD raided the home of Ernst Lohmeyer just hours before his inauguration as the president of Greifswald University in Germany. Lohmeyer had survived active duty in both World War I and World War II. A New Testament scholar and theologian, he resisted the rise of Nazi fascism as a member of the Confessing Church. But the Soviet occupation of Germany was even more repressive than Nazi domination. With the exception of correspondence from prison, Lohmeyer was never heard from again. In Between the Swastika and the Sickle, James R. Edwards recounts the story of Lohmeyer’s life, his theological achievements, and his courageous resistance to the forces of political repression.

Between the Swastika and the Sickle defies categories. It reads much like a standard biography, except the author intersperses his own academic career in the narrative. You’ll learn how Lohmeyer contributed to Germany’s reputation for the most cutting-edge biblical and theological studies even as you wonder how the country could unleash such terrible evil on the world. And you might think you know how Lohmeyer’s tragic story ends, until you arrive at his last letter. Only then will you realize the full meaning and purpose for Edwards’s investigation.

Even though my academic studies and personal interest have long focused on this period, I didn’t know much about Lohmeyer. Edwards fills in many gaps. Like Niemöller, who also served the German military in World War I, Lohmeyer saw the advance of God’s kingdom in the Kaiser’s orders to attack. It wasn’t a mistake he’d make again. Unlike Niemöller, Lohmeyer would become an early and ardent defender of the Jews against Nazi discrimination and violence. Lohmeyer wrote about the Jews as his “brothers” seven years before Bonhoeffer did. Lohmeyer paid the price when the Nazis revoked his professorship at the prestigious University of Breslau (present-day Wroclaw, Poland) and transferred him to Greifswald in 1935. The coming war would take him deep into the Eastern Front in Russia, as a captain in the Germany army. And it would eventually bring the Russians into Greifswald, which would become part of East Germany and the site of his execution in 1946.

As Ernst Lohmeyer suffered under the swastika for his principles, so under the sickle he would pay the ultimate price.

But what would the Soviets want with a New Testament professor and university president? That’s part of the mystery Edwards seeks to solve. Probably no one will ever know the full story. There’s no evidence he participated in German atrocities on the Eastern Front. To the contrary, he was known for integrity and mercy during his service as an officer for the German occupation of Russia. Edwards takes readers into these confusing and distressing days between the fall of Nazi Germany and the rise of the German Democratic Republic, which was neither German nor democratic nor a republic. Soviet domination of East Germany couldn’t tolerate a former German army officer seeking to restore his university on classic liberal ideals such as academic freedom.

As Lohmeyer suffered under the swastika for his principles, so under the sickle he would pay the ultimate price.

Before reading Edwards, I never could’ve traced theological views I take for granted back to Lohmeyer. While many leading scholars assumed that worship of Jesus Christ was a later Hellenistic development, Lohmeyer showed how this high Christology emerged unexpectedly from within the immediate Jewish context of the first Christians. Consider the most famous example, what we typically know as the “Christ hymn” of Philippians 2:5–11. With the eye of a poet and the training of a form critic, Lohmeyer could see that the text didn’t likely come from Paul, as it doesn’t seem to fit neatly in context, nor does the language or rhythm match Paul. But it didn’t come from the postapostolic period, either, because Pauline authorship of Philippians has never been in doubt. At the same time, it doesn’t match expectations for later Greek and Hellenistic forms. The Greeks didn’t talk of humiliation and descent for their gods. They valued knowledge, not faith. That leaves just one conclusion: “Far from being a late addition, the Christ hymn was one of the first confessions of Christian faith, already in use in the forties, perhaps even the late thirties, of the first century,” Edwards summarizes for Lohmeyer.

Edwards gives us a biography of a man, not just a martyr. While the martyr inspires us, the man reflects us.

Edwards doesn’t dwell on what might’ve been if Lohmeyer hadn’t been killed at age 56, or if he hadn’t lost so many potentially productive years of scholarship during the wars. That’s probably because Lohmeyer accomplished so much in his strange sojourn. His workload stretches the bounds of believability.

But I won’t remember Lohmeyer for his prodigious work ethic. I’ll remember him as a person in three dimensions, as a sinner saved by grace, as a husband and father adored by the family he often failed. I can’t think of the last work of history or theology that left me with such a surprising and weighty conclusion. I’m overwhelmed with emotion just recalling how this marked man reckoned with his sin’s consequences, which he could no longer rectify.

Edwards gives us a biography of a man, not just a martyr. While the martyr inspires us, the man reflects us. Edwards shows us the Lohmeyer we need as an example in life and learning.