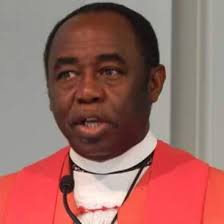 The annual gathering of conservative evangelical English Anglicans addressed the uncertainties of ministry in the present, given the challenges offered by the Church of England and Western culture, and emphasised the certainty of a future under Christ’s just reign promised in Scripture.

In an amusing and challenging interview, Archbishop Ben Kwashi spoke of how within ten years of narrowly avoiding death when his house and church were burned by Islamic terrorists, he dismantled and reordered an entire Diocesan administration, oversaw the planting of more than 200 churches, and supported his wife Gloria in her ministry of caring for dozens of orphans as well as their own children. Since the late 1990’s Jos has divided into further Dioceses with hundreds more congregations established as a witness to the gospel in a place of continued poverty, tension, violence and injustice.

Asked why there had been such successful evangelism in his Diocese of Jos, Kwashi told of how he took teams of clergy to visit unchurched areas for a week after time of research and prayer. Once congregations had been established, clergy and lay people were mobilised for further mission, and the Archbishop told of how teenagers can become particularly effective evangelists if they develop a passion for Jesus before and instead of the usual negative influences.

Earlier in the Conference, Archbishop Ben had shared more of his background. His father had been brought to Christ and mentored by young missionaries from England, who made huge sacrifices by journeying to Nigeria in the late 19th and early 20th centuries. Many of them died there, some within weeks of arrival; their love for the Lord and for the people made a huge impression on Kwashi senior and his son Ben who became an Archbishop and now General Secretary of Gafcon. “The gospel is the means of saving the world, and God has put it in our hands”, he said. “We must pass it on to the next generation with joy and conviction, hot and fresh”.

This for Kwashi is the central driving motivation for Gafcon. In the churches of the West, theological debate about the essentials of Christianity was “watering down the gospel, destroying faith, taking the church captive”. Gafcon as a series of conferences and a global movement has re-established faithful Anglicanism and provided structures for it to continue and thrive.  Anglican groupings have emerged, clearly separated from ‘official’ structures which have embraced heresy, such as the thriving Church in North America, and now new initiatives in New Zealand, Scotland and Brazil. In Africa, those with an anti-gospel agenda “use money to play with people’s lives”, Kwashi warned, but those who identify with Gafcon “are not willing to be sold”.

The theme of the Renew Conference, attended by nearly 500 people from 270 churches, was “multiplying ministries in the light of eternity”. Certainly Ben Kwashi’s ministry in Nigeria, and his current additional responsibilities with Gafcon exemplify this. The truths of the future coming of Christ, and the destiny of all human beings, as a comfort for believers and motivation for mission were outlined in Bible expositions by other speakers. “We can cope with suffering, but not hopelessness”, said Andy Mason, reminding us from the gospel of Luke that the King has come, the King will come, it will be a shock, and we are told how to prepare. A particularly excellent systematic treatment of the subject of hell by Kendal Harmon from the ACNA Diocese of South Carolina explained why and how the loss of this uncomfortable teaching in churches has coincided with the rise of secularism in society, and how recovering a sober and biblical understanding of judgement is vital for the evangelistic project founded on love and concern for the lost.

The conference heard from a number of different voices, live and on video, giving practical examples of multiplying ministry in local churches – a wide range, from mums sharing the gospel with others befriended at the school gate, to revitalisation of churches with a history of poor ministry and low attendance, to planting of new congregations inside and outside the Church of England. One vicar presented a well-produced video featuring a number of clergy from the south west talking about their strategies for identifying, training and releasing new leaders for ministry; lay people spoke of how they had moved to part-time work in order to support their local church’s outreach.

The vexed issue was addressed of what action to take in the face of Diocesan leadership increasingly promoting agendas contrary to the bible’s teaching, and sometimes being actively hostile to gospel ministry. While the majority remain in the C of E for now, an increasing number are looking at ways to visibly “differentiate” from spiritual fellowship with Bishops. A church warden described how in his parish a research group was established, to understand and communicate to the congregation the reasons for rifts over doctrine and ethics, to support the vicar on immediate action (for example letters of protest to the Bishop), and to explore options for the future to protect gospel ministry. Of course a small but growing number have left the C of E, or are preparing to do so, while remaining Anglican, connected to Gafcon. AMiE was given some exposure here (Free Church of England was not mentioned, and should have been).

A large group of clergy and laity such as this one will come from a variety of contexts and come up with different strategies for action, often guided by conscience. There was an emphasis on continued fellowship based on shared understanding of the gospel, and mutual support even for those embarking on different courses of action, rather than a one size fits all centralised approach. There will no doubt continue to be debate in the coming days and weeks on this. Meanwhile the work of gospel mission through the local church goes on. Archbishop Kwashi said that he was encouraged by being among such a number of ministers firmly committed to preaching Christ in the hard secular environment of the UK.