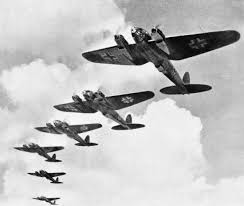 by Peter Simpson, The Conservative Woman:

TODAY is Battle of Britain Day. Would that it held a greater prominence in our national life. Let us consider why commemoration of this battle is so important.

The aerial conflict known as the Battle of Britain had been raging since July 10, 1940, but a particularly severe and crucial push was made by the Luftwaffe on September 15, when the German bombers had more fighter support than ever before. Goering was hoping that this enormous wave of bombing would constitute the final blow to Britain’s defences. So on the 15th, the skies all over southern England became one gigantic battlefield, and Fighter Command’s resources were stretched to the utmost limit.

Despite the enemy’s huge numbers, many of their aircraft failed to reach their targets in London, hindered as they were by the RAF’s Spitfires and Hurricanes. Sixty German planes were shot down upon this day, and this was enough to ensure that the Luftwaffe failed to achieve its goal of inflicting a killer blow upon London and of knocking out the RAF’s defensive capability.

Hitler had been planning to launch an invasion attempt on the back of this blow. However in the previous two weeks the weather in the English Channel had been very poor for the time of year, making conditions quite unsuitable for German invasion barges to be launched. The combined circumstances caused Hitler, on September 17, to postpone the invasion of Britain indefinitely.