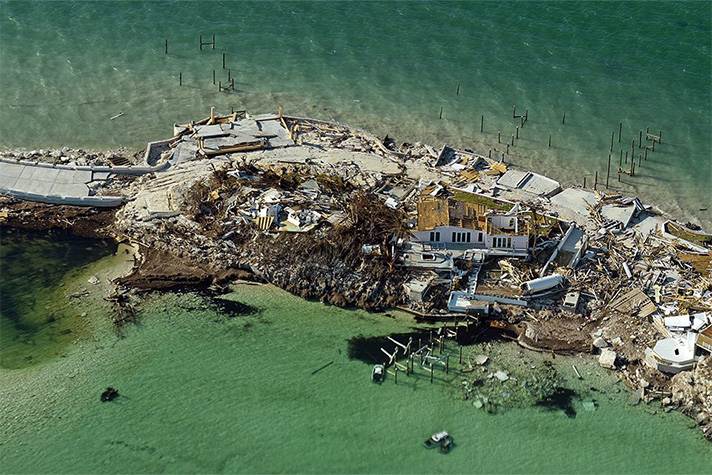 Hurricane Dorian was the strongest storm to ever hit the Bahamas. The Category 5 storm relentlessly raged over the Abacos Islands for two days, throwing off multiple tornadoes along its way.

On the tiny Bahama island of Man-O-War Cay, pristine white boats usually dot the clear blue waters. Its few hundred residents work hard and live quietly, many in the boat-building business and undisturbed by the outside world.

On Sunday, September 1, these 300 residents’ lives were capsized by Hurricane Dorian, a Category 5 storm that unleashed 200 mph sustained winds as it hovered over the Abacos Islands, making it among the hardest-hit areas. The official death toll for the storm is 50 people, but 1,300 more remain missing.

“We were thinking it was going to be bad, but not this bad,” said 45-year-old island native Jay Sands.

Riding out the hurricane in his home, he and four family members headed to the basement as conditions worsened.

“We were down there for 15 minutes before water started coming in,” Sands said. No longer safe, the family ended up “almost swimming” to Sands’s mother-in-law’s nearby house for shelter as they moved through the storm surge.

They spent the next few hours doing everything they could to stay alive, holding doors and putting tape across windows. All the while, they listened to the radio and hoped the roof wouldn’t blow away.

“It took all of us there to help save my mother-in-law’s house,” Sands said. “The Lord kept us safe and by the grace of God, no one was injured. We were fine.”

>> See photos of the Billy Graham Rapid Response Team’s ministry in the Bahamas.

Everything outside the house would appear anything but “fine,” though.

“Stuff was just everywhere,” Sands said, thinking about the rubble littering the yard and golf carts tossed here and there. “It looked like a dump basically … like someone tore down a home and piled it up.

“We were dumbfounded. I’ve been through so many hurricanes before but never had this type of damage at all,” Sands continued. Although the entire first floor of his home was flooded, the row of homes across from his lost their roofs to one of the tornadoes spawned off by the storm.

“All of the houses, all of the boats, all of the docks are damaged,” Sands said, adding that 75 percent of the island’s homes were majorly damaged or destroyed.

“Now that we have communication we are hearing of all the help coming in; so encouraging. Thank you. ‘Trust in the Lord with all your heart and lean not onto your own understanding; in all thy ways acknowledge him and he will direct your path.’”
—Samantha Sands, Jay’s wife

Nevertheless, his faith in God remains.

“I keep looking to God, keep praying and reading His Word,” said Sands, who attends Gospel Chapel—one of the island’s three churches.

“Nothing catches [God] by surprise, so we have to trust and rely on Him in all things, even in disaster. He knows what He’s doing. There are some challenges, but we’re keeping the faith, keeping strong,” he said confidently.

The Billy Graham Rapid Response Team is sharing that same message of hope on the islands of Freeport and Nassau, offering survivors emotional and spiritual care while Samaritan’s Purse focuses on reaching their physical needs.

>> Give to help chaplains minister to those facing crisis.

In the meantime, Sands is gathering supplies at Spanish Wells, an island 80 miles south of Man-O-Cay, and preparing to return home in the next few days to help with the cleanup.

“We’ll get the Abacos Islands, the Bahamas back,” Sands said, genuinely thankful for all of those who have already responded quickly with aid. “There’s a lot of work to do.”

Do you have peace during life’s storms? Trust in Christ today.