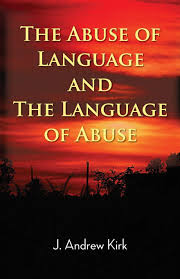 by Chris Sugden, The Conservative Woman:

WOULD that all the house of bishops and their press officers might read and discuss Andrew Kirk’s discussion of the current use of words in public debate. With chapters on tolerance, equality, freedom, rights, liberal (ism), fundamentalism and homo (and other) phobias, he argues that these words (and their opposites) are bandied about in current debate purely as hurrah and boo words to close down the legitimate debate and argument without which knowledge cannot progress. For example, the traditional definition of tolerance since the Elizabethan settlement and the Toleration Acts combined acknowledgment of differing views and the right to criticise them. But it has been permed into a new tolerance of anything goes, except criticism of anything goes which is intolerance.

Underlying all these words, their use and wrong use, lie two alternative views of what makes human beings human. One view is that humans are solely the product of a random process of evolution in which case any assertion of their fundamental dignity that is worthy of respect is without any basis. The other is that humans are created in his image by a sovereign creator who gifts them with dignity, loves them supremely, requires that they be respected equally and will call them to account. Which of the two views gives the best account of the evidence and of human existence and history?

Kirk has read the philosophers with care and gives very clear expositions of the views and isms which underlie western intellectual culture. Utilitarianism posits the greatest happiness of the greatest number without being able to justify any definition of what such happiness is. Consequentialism evaluates actions by their outcomes without any secure basis for deciding what the best outcomes might be. Liberalism becomes self-contradictory with its conviction that people have the right to follow their particular preferences in life without officious interference by others, but when their choices result in trouble or tragedy, the state is called on to ameliorate the consequences.