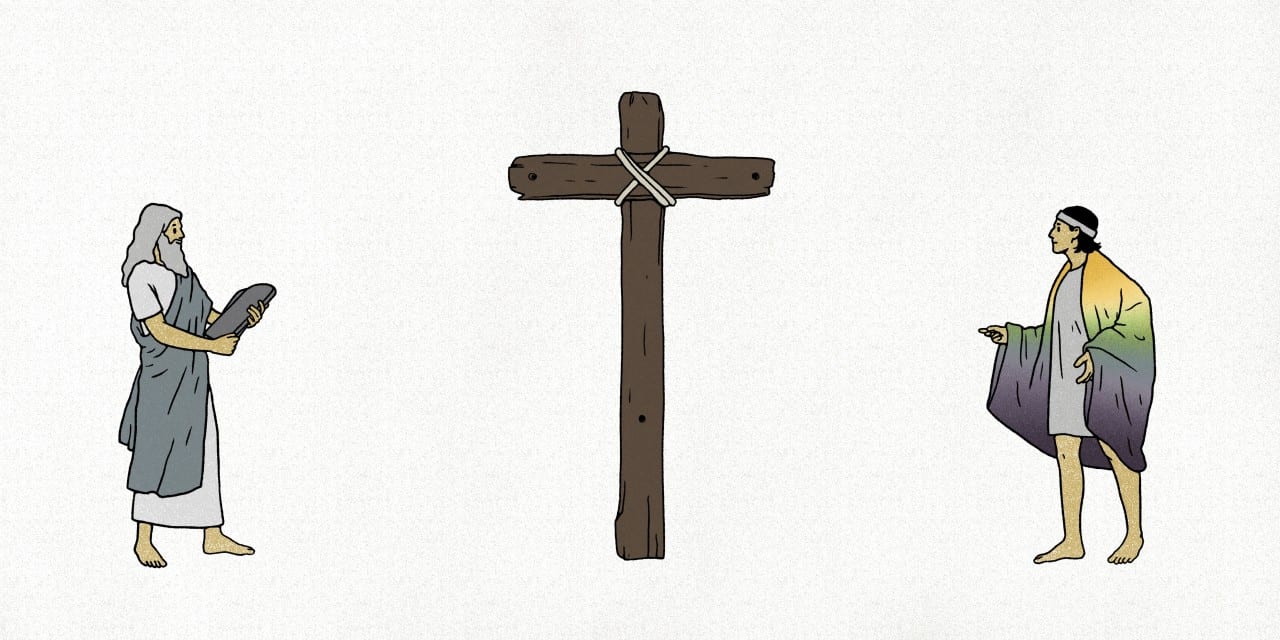 I don’t think I quite understood the beauty of the Gospels, and particularly Matthew, until I understood that meaning is contained not only in the content of the story, but also in the form. It wasn’t merely Matthew’s words, but the placement of those words—the way he tells his stories—that reveals his convictions about Jesus.

Matthew uses the form of his stories to depict the familiar—but with a twist. His Gospel, after all, furthers the story of Israel through the story of Jesus. Put most simply, one can read Matthew’s Gospel ably by asking three questions of the text:

The Gospel of Matthew is best understood with one eye looking back to the old story, and the other attuned to shifts in the new story.

Take, for example, the story of Jesus’s birth. At one level, the story of Matthew 1:18–2:23 is simple. Jesus’s birth is described from Joseph’s point of view. He learns that Mary is pregnant, but then it’s revealed to him in a dream that this child from the Holy Spirit will save his people from their sins (Matt. 1:18–25). In chapter two, however, Jesus’s family is on the run from King Herod. They flee to Egypt, come up through Ramah, and then go to Nazareth due to the danger (Matt. 2).

Yet Matthew is doing more than simply recounting the facts, ma’am. There was another Joseph who had dreams, who was righteous, who took his family into Egypt to save them, and then whose family left Egypt. Mary’s husband is the new Joseph whose actions echo, fulfill, and move Israel’s story forward. While Joseph in Genesis temporarily saved his people from famine by bringing them into Egypt, now the obedience of Joseph allows Jesus to survive and thereby save the nation from their ultimate enemy—their sins (Matt. 1:21).

The Gospel of Matthew is best understood with one eye looking back to the old story, and the other attuned to shifts in the new story.

Matthew’s account of the birth-and-flight narrative makes sense at a basic level. But if you look at Israel’s story you can see much more. By comparing it to Joseph the dreamer, Matthew has brought that old story to fulfillment.

And there is more. Matthew portrays Joseph, the husband of Mary, as the new Joseph—but he also portrays Jesus as the new Joseph. Both are chosen by their father, both are rejected by their brothers, both undergo suffering and exile, both are exalted in a foreign court, both turn and forgive their brothers who betray them, and both save their people. This Jesus is their new hope, their new rescue, and their new ruler to whom they must bow. Once the echoes are heard, it seems that more appear, and the depth and the beauty of the story is revealed.

Another example is the story of Jesus’s transfiguration in Matthew 17:1–8. Again, the story is quite simple at one level. Jesus goes up on a mountain and is transfigured beside Moses and Elijah. And yet while all three Synoptic Gospels include the mount of Jesus’s transfiguration, Matthew in particular draws readers’ attention to Moses and Sinai. The story he tells echoes Israel’s story, completes it, and moves it forward.

In all the Synoptics, Jesus—like Moses—goes up on a high mountain (Ex. 24:12) after six days (Ex. 24:16), three individuals are given special privilege (Ex. 24:1), a cloud descends (Ex. 24:15–18), and a voice calls out from the cloud (Ex. 24:16). Unlike the other Synoptics, however, Matthew includes three details that provide further fodder for seeing the Moses story as central. First, Matthew lists Moses first in the naming of Moses and Elijah (cf. Mark 9:4; Matt 17:3). Second, he includes an allusion to the coming of a prophet like Moses (Deut. 18:15). The statement about Jesus on the mountain is identical to the one at his baptism—“This is my beloved Son, with whom I am well pleased”—except for the addition of this command: “Listen to him.” Why? Because Moses commanded the people that when the prophet like him comes, “to him you shall listen” (Deut. 18:15). Third, Matthew is the only author to reference Jesus’s shining face (Matt. 17:2).

Jesus moves the story forward, because unlike Moses, Jesus’s face now always shines, and he doesn’t have to cover his face. Jesus reveals the will of God in his shining face.

The parallels are clear, but to what end? Matthew portrays Jesus not only as the new prophet and the new mediator, but as the one who truly shows what it’s like to follow the law and thereby be transfigured in God’s presence. When Moses received the law, and was himself transfigured, this revealed the law’s aim all along: transformation before God. The goal of the Exodus was to place Israel in their land under the rule of Yahweh, beholding his face and thereby becoming like him.

When Jesus is transfigured before the three disciples, he completes the story of Moses. He becomes the new mediator who goes up on the new mountain and reflects God’s presence. This fulfills the hope of the people living under the rule of Yahweh and becoming like him. Jesus moves the story forward, because unlike Moses, Jesus’s face now always shines, and he doesn’t have to cover his face. Jesus reveals the will of God in his shining face.

It isn’t only figures such as Moses and Joseph who provide fodder for deeper reflection, though. Symbols that echo, fulfill, and advance Israel’s story also fill out Matthew’s work. For example, Matthew uses the idea of blood—righteous blood—to connect the Old Testament to the New. Matthew wants his readers to tie the “blood narrative” from the beginning of the Hebrew Old Testament to the end and see it fulfilled in the blood of Jesus. In Matthew 23:34–35 he references the blood of Abel (the first murder in the Hebrew canon) to Zechariah (the last murder in the Hebrew canon). As Jesus explains, messengers have been sent to Israel, but they’ve been rejected and so there will be a divine reckoning:

Therefore I send you prophets and wise men and scribes, some of whom you will kill and crucify, and some you will flog in your synagogues and persecute from town to town, so that on you may come all the righteous blood shed on earth, from the blood of righteous Abel to the blood of Zechariah the son of Barachiah, whom you murdered between the sanctuary and the altar. (Matt. 23:34–35)

Look at the stories of Matthew in their larger context. You might be surprised at what you begin to see.

These references to blood cause readers to go back to Matthew 23:35 and thus read the “blood narrative” as echoing, fulfilling, and advancing the story of Israel. Jesus is the new rejected shepherd, whose innocent blood was shed. He is also the new Israel, who suffers the destruction of his temple, exile, and death at the hands of foreign enemies. But since his blood was wholly innocent, it brings forth the new exodus and the new temple.

In Israel’s history there were stories both of “innocent blood” shed—and of Israel’s blood shed by their enemies because of their sins. Jesus’s blood fulfills both narratives. While the story of Jesus’s death makes sense at a surface level, looking at the larger story of these symbols reveals a stunning depth to Matthew’s narrative.

I don’t have enough space to explain how, for Matthew, Jesus is the new Abraham (who has many children from the East and West), the new David (who is the true king), the new Solomon (who delivers wisdom in his teaching), and the new Jeremiah (who laments the fate of Jerusalem). Judas is the typological betrayer of the nation (the new Jezebel, Ahithophel, and Absalom). The disciples are the new 12 tribes of Israel, and the Jewish leaders are the new rulers from Egypt, Assyria, and Babylon. The mountains in Matthew are the new Sinais. The deserts are the new wilderness of Israel, and the rivers are the new crossings into and with the people of God.

The best way for Matthew to disciple and teach future generations—to fulfill the Great Commission—is through these stories of Jesus that echo, complete, and advance the narrative of Israel. Matthew’s inspired wisdom is embedded in his literary form.

So look at the stories of Matthew in their larger context. You might be surprised at what you begin to see.