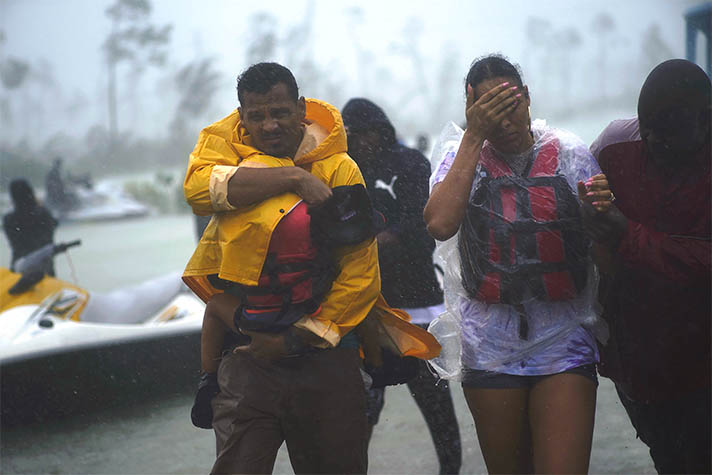 The Rapid Response Team has deployed to minister to those affected by Hurricane Dorian, the strongest storm to ever make landfall in the Bahamas. Here, a family is rescued in the midst of Hurricane Dorian’s high winds and heavy rain in Freeport, Bahamas. (AP Photo/Ramon Espinosa)

The Billy Graham Rapid Response Team (RRT) has deployed to offer emotional and spiritual care to hurting residents in the Bahamas in the wake of Hurricane Dorian, the strongest storm to ever hit the islands.

The monstrous hurricane hit the Bahamas as a Category 5 on Sunday, and hovered over northwestern islands with strong winds and pouring rain for two days. At least seven people died in the hurricane, and thousands of homes have been severely damaged or destroyed in what Bahamian Prime Minister Hubert Minnis called an “unprecedented” disaster.

“It’s a catastrophe of historic proportions,” RRT Assistant Director Josh Holland said from Billy Graham Evangelistic Association headquarters in Charlotte, North Carolina. “The videos and images I’ve seen have just blown my mind. The water levels rising to the second floor of homes, the destruction of course, people have already lost their lives and more are missing. Our thoughts and prayers are with the people of the Bahamas.

>> Give now to support chaplains’ efforts in the aftermath of Hurricane Dorian.

Now a Category 2 storm with maximum sustained winds of 105 mph, Dorian is moving dangerously close to the East Coast while clearing out of the Bahamas enough for the RRT to set up base with Samaritan’s Purse on the island of Nassau. After flying in a DC-8 plane filled with supplies Wednesday morning, the organizations are working alongside church partners to determine the areas of greatest need. While crisis-trained chaplains will be offering a listening ear and the hope of Jesus to survivors, Samaritan’s Purse will be giving out emergency items, such as temporary shelter materials and household water filters.

For now, rescue operations remain underway in the hardest-hit areas of the Bahamas, and the United States is hunkering down with mandatory evacuations as Dorian slowly skirts up its coastline. In addition to the response in the Bahamas, the RRT is visiting evacuation shelters in Callahan, Florida, to offer peace and comfort to those being temporarily housed while the storm passes.

Hundreds of volunteers from the RRT’s 1,500-plus chaplain network are still on standby and ready to offer God’s love to those who may be affected by Dorian. Forecasters are predicting the storm may sprawl its high winds, life-threatening storm surge and heavy rains to Georgia and the Carolinas, possibly making landfall along the coastline later this week.

“The models vary, but as we track what Hurricane Dorian does, we can pray that it continues to move out to sea,” Holland said, extending his arm outward. “Just continue to pray for everybody in evacuation areas that are leaving their homes, worried about their property, that they would take necessary precautions to prepare and keep themselves safe.

“We’re prepared for the worst while praying for the best.”

Do you have peace in the midst of the storm? Surrender your heart to Christ today.