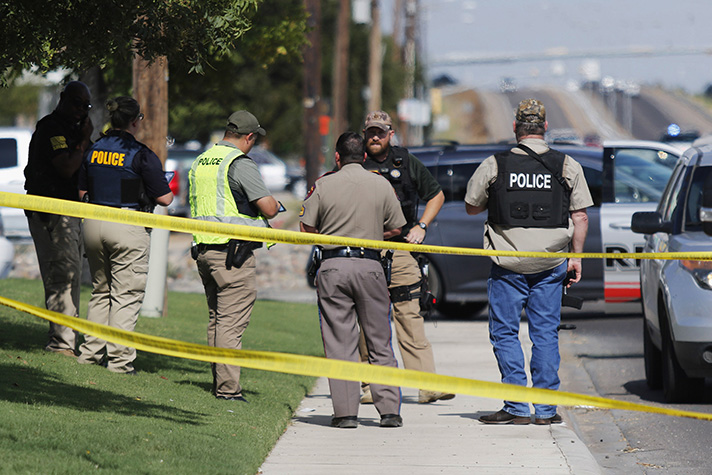 Authorities cordon off a part of the sidewalk in Odessa, Texas, on Saturday. (Photo credit: Mark Rogers/Odessa American via AP)

The gunman opened fire after a traffic stop, and continued firing shots at shoppers and vehicles as he drove between Midland and Odessa. He was later confronted by police and killed, according to reports.

The Billy Graham Rapid Response Team (RRT) has deployed to the area and will have seven crisis-trained chaplains in place by Sunday evening. While there, they will minister to the injured in hospitals, the Department of Public Safety and the local community.

“We are saddened by the shootings in Texas this evening,” Josh Holland, RRT assistant director, said Saturday night. “We are fervently praying for all of those impacted by this senseless act of violence and are working with churches and law enforcement in the area to assess how we can help address the emotional and spiritual needs in the area.”

Holland called Saturday’s attack a “devastating mass shooting that we’ve seen way too many of lately.”

The purpose of a RRT chaplain is to offer the “presence of Christ,” he said, and in situations like this, to listen and pray as people process their anger and grief.

“There’s not a whole lot of words sometimes to say, so just a lot of listening, a lot of just being present in the moment,” he said.

Please keep all the families affected by this shooting in your prayers. Also pray chaplains can help provide the comfort these communities need in the midst of crisis.