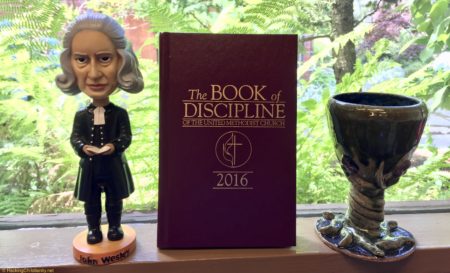 Write GC Legislation, no matter what.

There’s an undercurrent right now that I’m hearing in some United Methodist circles: with much of the energy towards unity, division, or dissolution plans, why bother with legislation? Why bother writing various polity and belief changes when all the oxygen in the room is being sucked up by the unity or division plans?

However, the reality could not be further from this narrative. Progressive and Centrist United Methodists should be crowdsourcing, compiling, proofing and testing legislation to be considered for inclusion in the Book of Discipline 2020.

Because otherwise, they’ll be giving away the farm.

Every Voice should be heard

Every four years, 99% of the polity, beliefs, and practices of The United Methodist Church is up for amendment, adaptation, retention, or deletion. The Book of Discipline is (mostly) written by General Conference, held every four years, the next one in May 2020 in Minneapolis.

So you can see that the content of the debate at General Conference is written by…well, anyone—including you! And each petition has to be debated: In our polity, added in 2016, it says that every petition will receive a vote in a legislative committee. Now, that can mean that several petitions are bundled together and voted up or down together, but it still means that your petition must be engaged. So progressive ideals in legislative form have to be read and engaged in the polity process.

In conclusion, you can see if only one side has created content to be debated, then the conversation is stilted and radicalized without the counterpoints to reign the conversation back to a Methodist middle ground. Therefore, progressives and centrists must write legislation to keep General Conference from become more radicalized than it already is. Write legislation by September 18!

The Big Ideas are on Hold

2020 has a big hole in the middle of it. Progressive and Centrist ideas are needed more than ever because 2020 was supposed to be a big year of four major revisions…and only one of them has survived.

Why did all these big ideas die? We had a lot to look forward to, and the Traditional Plan at General Conference 2019 nuked a lot of it. The uncertainty and acrimony that the Traditionalists soaked The UMC in meant that these multi-year and million dollar initiatives were delayed indefinitely.

So with these institutional voids, Traditionalists will certainly take action to fill up the space. Progressives and Centrists cannot abandon the field, and they should write legislation around these conversations too (particularly the social principles question). Write legislation by September 18!

Anti-gay vehicles for other polity changes

Finally, there’s the problem that if all we are focusing on is unity or division, we forget the role that Wedge Issues play in our national and ecclesial politic.

Wedge Issues are ones that are intended to rally one side to vote in their people. Gay marriage referendums were scheduled the same year as President Bush Jr’s reelection campaign in 2004, and it worked to bring out the Republicans, who then used their majorities to effect many other policy reforms that Republicans were not particularly keen on, and were certainly bad for the country.

In the same way, opposing LGBTQ+ inclusion has been baaaaaaaaaaank for the Traditionalists as they made that the one issue for election of delegates. With those delegates firmly in place, the Voter Guides which are created by the caucus groups gave minimal explanation on all the issues being voted on so that people would just vote in lockstep or refer to the guides before voting on the floor. All caucus groups do it, but the Traditionalists have been particularly effective with Central Conference delegates because their radical ideas gain more legitimacy due to that they are seen as correct on one major issue: LGBTQ+ exclusion. If caucus groups are right on kicking out The Gays, then they must be right on turning seminary support into individual vouchers. Right?

The truth is that wedge issues are useful distractions to effect other legislative changes. Remember in 2019 that LGBTQ inclusion was cited as the reason to vote up legislation that had nothing to do with LGBTQ inclusion: the disaffiliation petition? As it was, the only churches who used the disaffiliation petition legislation to get out of United Methodism were ultra-conservative churches in Mississippi. Not progressives: Traditionalists! Thanks Central Conferences for allowing these churches to stop paying apportionments to support the global church!

While we may think that unity and division will be center stage, we cannot let these distractions keep us from keeping the progressive perspective in all other areas of the church’s polity, beliefs, and practices. Write legislation by September 18!

Call to Arms (that are writing legislation): Protect Women

In 2016, one of the travesties was the exit of United Methodism from a women’s health and reproductive care organization. Along with many other failures to affirm women’s health, it was a rough year for affirming women’s role in the largest American denomination that ordains women.

With the Republican zeitgeist against women in state houses across the country and with the Trump administration in full, active war against women’s bodies and autonomy, you can bet Traditionalists in The United Methodist Church will take full aim at women’s health again in 2020.

We cannot let this incredible denomination that affirms women in ministry and in the the workplace lose ground again because of patriarchy and fragile masculinity masked as “orthodoxy.”

Pick up a pen, start writing

In short, a void of progressive legislation robs the conversation of the values to which all legislation ought to be compared: the inclusion of all people, equitable relationships, solidifying gains for minority people groups, and theology informed by science and reason. While Progressives do not have a monopoly on such values, they are often missing from actual legislation, so writing these petitions will bring that into the room to be actually voted against or supported.

I’ll personally be penning multiple petitions to correct, augment, or replace sections of United Methodist polity. I don’t care if they are never considered. They are to be included to name what is important, and I hope you join me in that. Write legislation by September 18!

2020 will be different than any other year as there are more progressives and centrists than ever before (though not a firm majority). We need to give those delegates progressive and centrist proposals to consider on the floor, included by the September 18 deadline and properly translated as part of our work together.

Get those proposals in to assist the delegates with their work! Write legislation by September 18!

Progressives: Be Loud. Take up space. Your voice matters. Your legislation is needed.