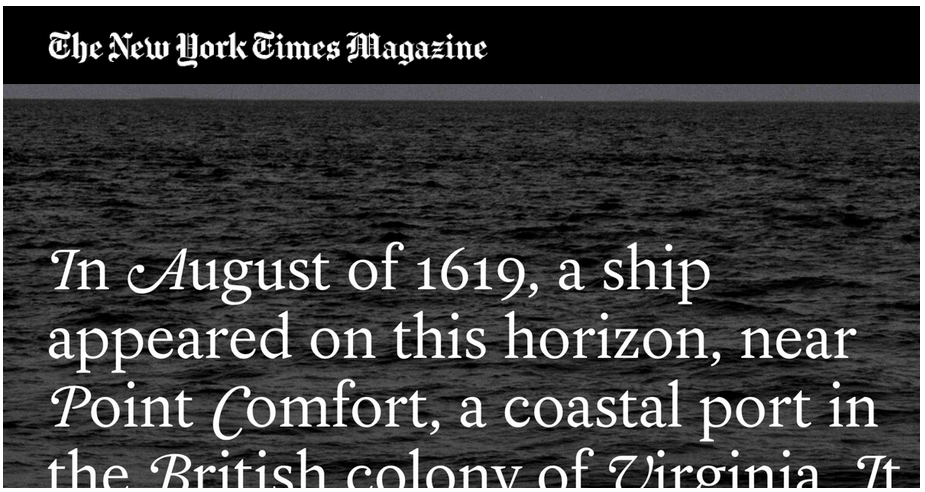 and videos that Covenant News Service believes may be of interest to others. Each Friday we post five of them. Following is a sample of those submissions—their inclusion does not represent an endorsement by the Covenant of any views expressed.

The New York Times published a major multimedia, interactive undertaking that marks the 400th anniversary of the first kidnapping of West Africans before they were brought to America in 1619. The project includes videos, podcasts, written and photographic essays, poetry, and other literary forms. The Smithsonian is a partner in the project, which took six months to pull together. It is a stunning work and covers American history that many of us never learned in school. Resources for teachers also are available.

A PDF can be found here.

From the article: “The 1619 Project is a major initiative from The New York Times observing the 400th anniversary of the beginning of American slavery. It aims to reframe the country’s history, understanding 1619 as our true founding, and placing the consequences of slavery and the contributions of black Americans at the very center of the story we tell ourselves about who we are.”

Global church history led the Evangelical Free Church to drop its premillennial theology of the end times this summer. The denomination voted to eliminate “premillennial” from its statement of faith, acknowledging that different views of eschatology have been held since the beginning of Christianity.

From the article: “We believe there is a significant inconsistency in continuing to include premillennialism as a required theological position when it is clear that the nature of the millennium is one of those doctrines over which theologians, equally knowledgeable, equally committed to the Bible, and equally Evangelical, have disagreed through the history of the church,” the EFCA stated.

When Does Breaking News Compel a Preacher to Rewrite Sunday’s Sermon?

When breaking news hits over the weekend, preachers may ask themselves whether to alter their Sunday sermon to address the event. While every pastor must consider his or her own context, this writer offers four questions that can help preachers examine their planned sermon.

From the article: “If I do not change a word, will this sermon still speak honestly and sufficiently about the world where this news happened?…Does it speak to the way the Spirit stirs people to respond generously and self-sacrificially in the most difficult of circumstances? If it does not, then it must be changed.”

The Question We Ask Every Mom (But Never Dads)

Kate Ryder, a founder and CEO of a digital health company, says she is asked at least once a week, “’How do you do it all?” Her husband, Lee Teslik, an executive at Google, says no one has ever asked him that question. They recently recorded a conversation about that dynamic. Topics include what the question says about society’s expectations, why the question is most often framed around childcare, and whether being a mother limits a woman’s career opportunities.

Lee: How do you answer the “how do you do it all” question?

Kate: Well at this point, it follows a script [Laughs]. I usually say “not gracefully” and then change the subject back to whatever I was talking about. Or, if it’s too awkward to answer it like that and I need to get into it more, I usually say something about having a supportive husband, family, and community.

‘Where I’m From’: A Crowdsourced Poem That Collects Your Memories of Home

When National Public Radio asked listeners to submit poems on the topic of “Where I’m From,” they received 1,400 submissions in just two days. Thoughts from the poems were then edited to form a single poem.

From the poem:
“I am from casseroles and canned tuna
Kennedys and Saturday morning cartoons
I am from Tang in a Daffy Duck glass
from wall phones with mangled cords stretched during private calls in a room too far
I come from popcorn ceilings
dining rooms of glossy mahogany”