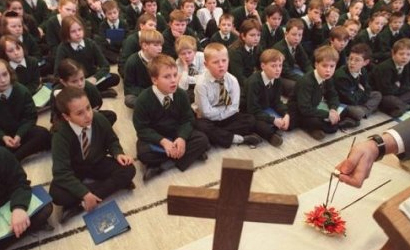 Three schools in Ireland will make history this week by becoming the first to cast aside their Catholic ethos and become multi-faith state-run schools.

The primary schools will no longer prepare children for the sacraments of Holy Communion and confirmation but will offer a multi-belief and values program in place of Catholic instruction.

The seismic change comes in an effort to survive and become more inclusive, as well as to gain more state help for staffing, IT and building maintenance.

Three primary schools will no longer prepare children for the sacraments of Holy Communion and confirmation.Tweet

The schools hope to retain and draw pupils from Ireland’s growing number of atheists, agnostics and children of immigrants, which is currently 17% of the population.

The three small primary schools — Lecarrow in County Roscommon and Tahilla National School and Scoil an Ghleanna in County Kerry — will reopen for the new term Thursday under the umbrella of local education and training boards.

“Catholic families have contributed to their schools over the generations to ensure that their children are brought up in the Catholic faith. Making these Catholic schools into multi-denominational schools is a betrayal of this sacrifice across the generations,” he stressed.

Donnelly agreed that “the recent Irish referenda that voted for the legalization of gay pseudo-marriage and the murder of babies in the womb through abortion show that Catholic schools in Ireland have failed in their primary responsibility of handing on the Faith.”