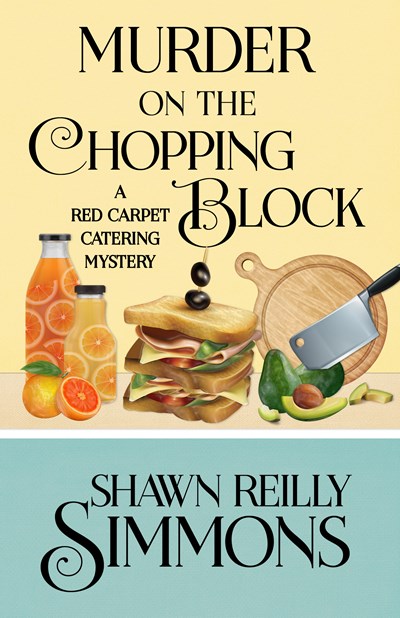 Penelope Sutherland has been given an unexpected contract to provide the culinary service for Pope Productions in Southern California, though her home territory was New Jersey. Her enjoyment of the new environment was quickly jolted by the death of the current show’s star, Sebastian Beauregard. Everyone knew who shot him, it was not so clear who had placed the fully loaded prop gun into his hand before he pulled the trigger.

Penelope and Joey, her boyfriend and New Jersey homicide detective, found themselves in the midst of a double murder that was shaking up the small community of Salacia Beach, CA, where filming was taking place. The victim’s families and the co-stars were the primary suspects. Penelope would find her life on the line before the guilty party would be revealed.

Though the seventh book in Simmon’s Red Carpet Catering Mystery Series, it was only the second that I have read. Having missed several earlier parts of the story did not in any way distract from this reader’s enjoyment of this book. This would be true for the average reader, though I would hope a library would consider adding the entire series to their collection (either as hard copies or as e-books). The book provided a relaxing 8-hour read, enjoyable whether a food-connoisseur or a fast-food junkie.______________
This review is based on a free electronic copy provided by the publisher for the purpose of creating this review. The opinions expressed are my own.