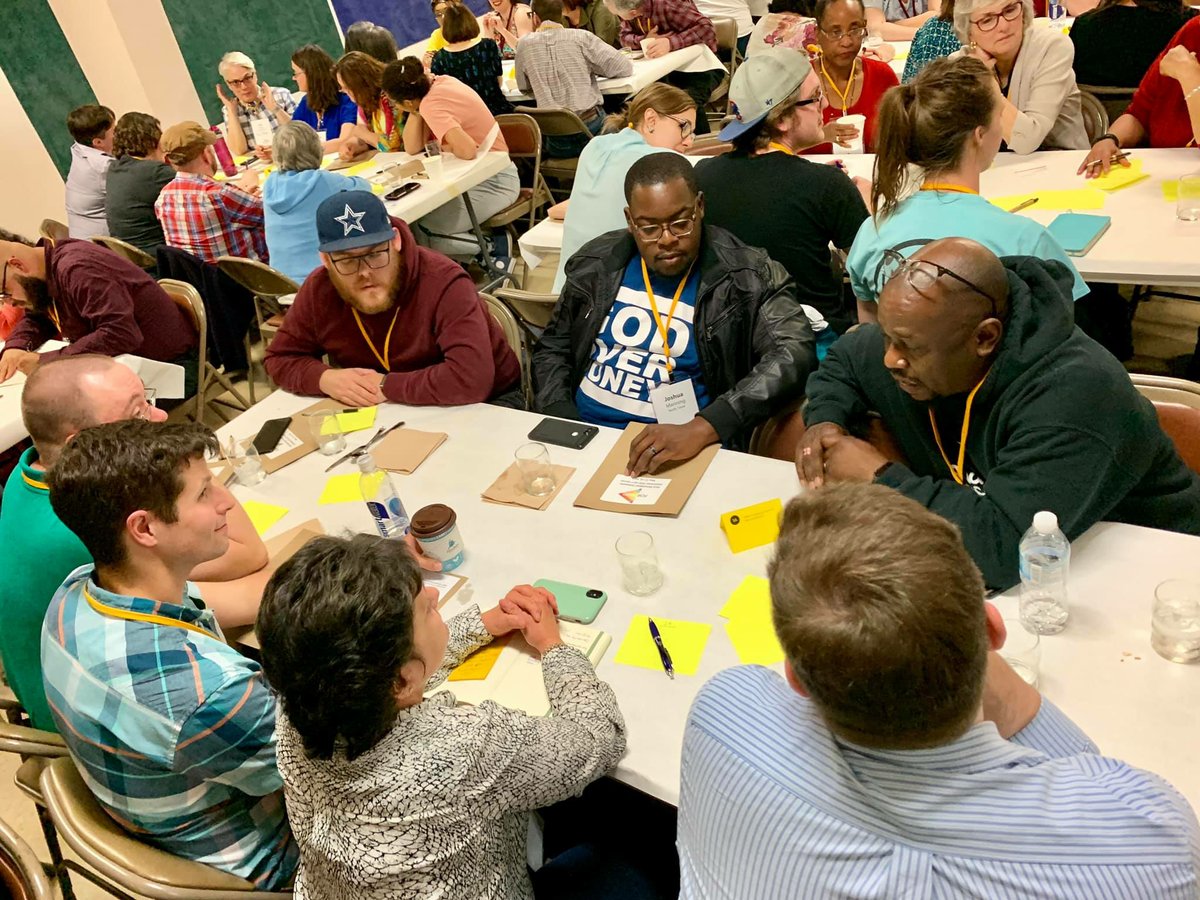 Now that they’ve had some time to process their experiences, participants in two recent U.S. conferences on The United Methodist Church’s future hope the denomination will move away from the Traditional Plan. They’re just not sure whether it will move together or apart.

However, they’re reluctant to talk specifics, mainly because details, such as how to overcome the Traditional Plan or how to divide resources and property, haven’t been clarified yet. If that sounds disconcerting to readers, participants share their frustration.

One thing on which they agree: they sensed God’s Holy Spirit infusing their sometimes painful discussions, and they seek to discern where the Spirit is leading the worldwide denomination. They hope the Holy Spirit will come into the hundreds of discussions now taking place across the UMC, especially in the United States.

United Methodist Insight interviewed participants from both the Our Movement Forward and UMC Next meetings. Here are edited versions of their responses, which the participants have approved for publication.

Alisa Isaacs-Bailey, an educator from the Indiana Annual Conference, attended UMC Next. She self-identifies as a lesbian.

“I think [UMC Next] exposed not only homophobia but also racism in the United Methodist Church. Whatever the change is, it has to be different from what we’re doing. The structure is keeping us from ministry.

“I was impressed by how devoted people were. I got kind of emotional at times because there were ordained clergy willing to risk to help me. There are no questions in my mind that the Holy Spirit was there. We all knew something was happening, and we each individually had some idea what was happening.

“I just wish the people who value this hurtful language [in the Book of Discipline] would go start something new. There’s so much I love about the United Methodist Church as it is. The more I listened the more I became convinced that God is making a new thing and it’s our job to see it through. In the meantime, we’re not going through with [the Traditional Plan] anymore.

“I came away feeling more than OK with no media presence or any outside presence. We had speakers who came out to the group and could have been brought up on charges. I posted a couple of things on Twitter like ‘the language is harmful.’ Somebody discovered that Florida Conference chapter of the Wesleyan Covenant Association captured my tweets, put them up on their website and began a misinformation campaign. Pictures I posted from opening worship, Florida WCA took and twisted. A woman at my table was attacked online by name in her annual conference; she said it had happened before.

“We discussed having a national day of resistance on Jan. 2, the day after the law goes into effect on Jan. 1. What might that look like? We put that in our notes and I expect we’ll see that in the future. Even with our Indiana colleagues, resistance is going to look different. My little church in Greencastle was the first Reconciling Congregation in Indiana. I’m going to meet with my church and other interested people and talk about what this demonstration will look like. For example, how do we take care of our pastor’s family if he resists [by conducting a same-sex wedding and gets suspended for a year]? We’re asking some people to take a larger personal risk than others.

“While there were only 600 people in the room, everyone I talked to felt they were connected to something larger than that. We bore with us the lives of others, how many others were there with us in spirit. I felt that very keenly. It wasn’t an elite group, it was a few representing the many.”

The Rev. Dr. Israel (Izzy) Alvaran of San Francisco, a member of the Philippines Annual Conference, serves as a regional organizer for Reconciling Ministries Network. He attended both Our Movement Forward and UMC Next and shares his personal observations:

“Our Movement Forward was largely organized by UM Forward – the same people who supported the Simple Plan, which would have simply removed all the [anti-LGBTQ] language in the Book of Discipline. UMC Next organizers, it seems, supported the One Church Plan – a compromise that allowed for contextual missional response to LGBTQ inclusion as a step to full inclusion across the denomination. Some believe that freedom of conscience is tantamount to giving conferences the right to discriminate. So the two meetings, while sharing some common values – rejection of the Traditionalist Plan, stances of resistance, removal of all discriminatory language in the Book of Discipline, and developing new expressions of Methodism – were coming from groups with very different strategic views.

“As an out gay clergy and organizer serving constituencies in both groups, I would like to see collaboration on points they already agree on. It is vital that marginalized groups are intentionally centered and their voices heard in leadership. I also believe in relational organizing and worry that we issue statements that are not matched with local church grassroots outreach and relationship building. I want to be part of a church that embraces people around a table of reconciliation. I want to be part of a movement that does work at the grassroots and seeks change from the ground up.

“Labels are really getting old. If you’re for full inclusion of LGBTQ persons and all marginalized communities, then your heart and mine are together. For purposes of moving something forward, let us begin with what we agree on and then work on the details. It is challenging and messy because we’re building the boat as we’re sailing it. After a bruising special general conference, a lot of trust building needs to intentionally happen. We also need to name our privileges and acknowledge the harm done to LGBTQ persons and their loved ones.

“My job is to guide congregations through the process of becoming a Reconciling church, and it’s not a short nor easy process. I see our denomination currently going through some kind of rushed Reconciling process on a macro level. However, we don’t have a common process for doing these conversations right now – across movements, across organizing groups, and in the pews. These conversations are difficult because it includes legal issues around property and money. While some are not concerned about these, I see it from the stand point of faithful stewardship.

“For me, the church died in 2019 in St. Louis. I saw it die. I was like, ‘Oh, my God, the church is dead.’ How can we who are developing these conversations come to a consensus? Right now, it looks like we are in a food court and people are getting their favorite dishes from different stores and not sitting to eat together. It also seems we are talking about different movements happening simultaneously that some see as mutually exclusive. I hope that as advocates for full inclusion of all God’s children we would mirror our values in how we work together.”

“My initial observation: how refreshing to experience the diversity of United Methodists, especially the number of young people there. They brought a lot of youthful presence and energy. There was racial diversity, LGBTQ presence, women, men, it was a great expression of what we hope the church can be like. There was passion present; it was challenging but a hopeful sign.

“I had hoped we might come away with a clear sense of direction. I’m a Type A – I’m always ready to jump to it and get down the road with a direction and a plan. Instead we spent lots of time listening to people’s experiences in the church. Some people who haven’t been around this kind of diversity before – they needed to understand who folks are. That was very important for many.

“We had lots of time to engage with 6 to 8 people. People at my table are very eager to see a more inclusive church, whatever that looks like. We can’t stay or abide in the church with the Traditional Plan. We were clearly agreed on that.

“[UMC Next’s ‘Four Principles’] are strong statements. I wish we could have ended with a clarity of direction. They’re aspirations in terms of talking about what we long for.

“In the end, we came up with two options – work toward amicable separation and new expressions such, or stay and reform. ‘Amicable’ and ‘stay-reform’ were dead even.

“There were a good number of folks who had never been involved in denomination-wide even, so they weren’t familiar with the implications that starting new would have on these areas of the church.” It was hard to make an informed decision; it would have taken more time.

“Now our Indiana team will work to share UMC Next with our conference and think about General Conference 2020.”

“I felt it was hopeful and eye-opening to the challenges before us as centrists and progressives. It was beautiful to be in a diverse gathering, [with a] broad view of perspectives, pointing to the sins of our past and present around all the different ’isms.’ We were intentional about being inclusive, trying to really hear voices, using pronouns.

“We talked about forms of resistance on Jan. 2; that’s going to be different in each geographical area, but we have violations of the Discipline happening now – rebaptisms, not holding the required six special offerings – and we overlook them. Whether people conduct same-sex marriage, whether conferences ordain LGBTQ persons, that’s going to depend on regional differences.

“Finally, when I’m talking about resistance, I want to be clear that while some centrists and progressives will be resisting, some also will be working on dissolution and disaffiliation. The dissolution route will require us to work side-by-side with our more conservative colleagues to form new branches of Methodism that allow us to flourish amid our differences.”

Cynthia B. Astle serves as Editor of United Methodist Insight, which she founded in 2011.